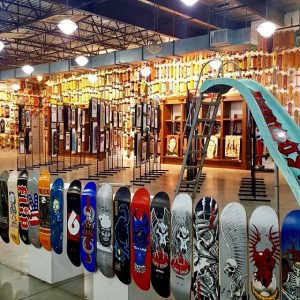 In addition, this museum-park combo also inducts several distinguished skaters into its hall of fame of each year.

The Hall of Fame is a who’s who of skaters. Since the inception of the organization in 2009, about 40 well known skaters have been inducted.

One of last year’s inductees, for example, is David Hackett. He started skating when he was five and became known as the Evil Knievel of skateboarding by taking on extreme tricks. He once jumped over three cars end-to-end with a rocket-powered skateboard.

Famous skater Tony Hawk is also on the short list of hall of famers. As one of the most influential athletes in the sport, Hawk won six gold medals for skateboarding in the X-Games and is the first to complete a trick known as “The 900.”

You can learn about the inductees and their contributions to the sport inside the museum.

What to do during your visit

Of course your visit should include a walk around the museum. Take a look at all of the cool boards and memorabilia and truly take in the history of the sport. Several staffers are there to answer questions and aid in your skateboarding education.

Once you’ve toured the museum, hit the halfpipe. Visitors say the ramp, which is a four-foot mini, is a blast to try. And, if you plan ahead, you can even take a class.

The Skateboarding Hall of Fame and Museum is free to the public to visit and is open Wednesday-Friday from 2PM-9PM, Saturday from 10am-9pm and Sunday from 11am-7PM.

Consider bringing some extra cash for a souvenir too. The gift shop has great t-shirts, posters, and skateboarding decks available for purchase.

After you’ve worked on your kick-flips, walk outside and check out the rest of the Simi Valley Town Center. You’ll find great shops and restaurants all in the same plaza. Grab a bite to eat at Larsen’s Grill or stick around for a comedy show at Studio Movie Grill.

Whether you’re an avid skater or not, the Skateboarding Hall of Fame is a must-see on your next trip to Simi Valley. In just one visit, you’ll get an unrivaled history lesson, learn about some of the sport’s greatest athletes, and tweak your moves on a super-cool indoor ramp.

The Skateboarding Hall of Fame is another facet of the museum that seeks to honor influential individuals in the Skateboarding community. Each year an executive committee in collaboration with skateboarding professionals and past inductees vote on a new induction class into the hall of fame.

The induction ceremony is open to the public and will be taking place on May 2, 2019 at The Globe in Los Angeles. 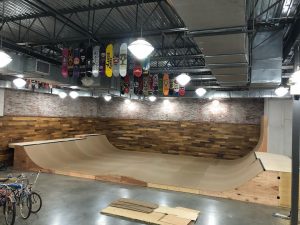 The Skateboarding Hall of Fame and Museum is free to the public to visit and is open Wednesday-Friday from 2PM-9PM, Saturday from 10am-9pm and Sunday from 11am-7PM.

Grab some lunch before you go visit the museum then spend the rest of the day enjoying all of the other fun things to do in Simi Valley or bring your board and skate their half pipe!